How much has quarantining together aged your relationship?

Does it feel like you’ve been together with your significant other longer than you have? According to new research, you’re not alone. A year stuck in quarantine with someone actually counts as four years toward the relationship.

In honor of Valentine’s Day, Groupon partnered with mathematician and Cambridge doctoral candidate Bobby Seagull, to develop a proprietary math formula* to come up with the quarantine relationship equivalent of “dog years” to quantify the extra time couples have spent together, as well as to account for the inevitable boredom.

To calculate how much your relationship has aged during the pandemic, please click here.

A poll of 2,000 Americans in a relationship who live with their partners found that over half say time has passed much more slowly over the past year because they’re unable to experience new things together.

The study commissioned by experiences marketplace Groupon aimed to uncover how quarantine has impacted couples and discovered nearly 60% say COVID-19 has been the ultimate test in their relationship.

And since couples have spent so much time together, they’re bound to get on each other’s nerves from time to time. Twenty-seven percent of respondents found that their partner listening to loud music or the TV while working was enough to irk them.

Frustrations among partners living together reached new heights in 2020 and being cooped up with a partner can make even the small things annoying. Sixteen percent found their partners hogging the desk or shared space in general.

Nearly a quarter said they find their partner in the bathroom whenever they need to use it.

"The pandemic has been challenging for couples on many levels, however there are some strategies that they can implement to alleviate any stressors that arise in the relationship. One such strategy is to create a filter system for each specific stressor,” said Bernard de Wet, a Chicago-based licensed couples therapist.

Despite the challenges of being with your partner all the time, people have found some perks that come with spending so much time together. Seventy-three percent quarantine has strengthened their relationship and a further 65% learned more about each other.

That being said, this time together has allowed couples to have more discussions than they would have had the time to do otherwise. A third (32%) discussed their past more openly than ever before and really dug into the issues and any potential hiccups within their relationship.

Additionally, 56% discussed their future plans with their partners while a further 34% have been more open about what they both want in the relationship.

Seventy-seven percent of respondents said they’ve learned more about what their partner actually does for a living as a result of working in close proximity to them throughout the past year.

Six out of 10 people surveyed (64%) said they work in a different room than their significant other as a way to get some privacy and alone time.

One out of three respondents (37%) said they take lunch breaks together.

Beyond the little partner annoyances that are bound to arise after spending a lot of time with someone, 49% say their relationship has been stuck in a rut after being cooped up indoors since March 2020.

Sadly, 28% of respondents don’t know what to do with their partners on the weekends to break out of their routines.

Forty-two percent of those studied say they spend too much time on their phones while a further 57% find themselves watching TV in sheer silence.

As a result, the average respondent hasn’t had a date night with their partner in five and a half months. But 81% are hoping to make this Valentine’s Day the best one yet since 2020 was so rough.

“Many couples are currently spending more time than they ever have together, such as working from home and being in each other’s company throughout most of the day. As such, creating shared, meaningful experiences may be beneficial for the relationship. That said, it may be challenging to lean on some of the previous typical relationship or dating rituals that you and your partner shared prior to the pandemic, which will require more creative solutions. This may include going for a car ride together and having a picnic in the car or ordering food that originates from a country that you either planned to visit prior to the pandemic or want to go visit once it’s safe to do so,” de Wet added.

P = Pre-pandemic average number of hours cohabiting couples spent together per year. Groupon’s research found this was 1,696.76 on average.

HWD= Hours spent together as a couple during an average week (excluding weekends) during the pandemic. 76.95 hours according to the research

T = the tier factor – the number of weeks working from home together since the pandemic began. Research found the average was 28 weeks (about 6.45 months)

HWE = Hours spent together as a couple on an average weekend during the pandemic. The research found couples spend an average of 12.30 hours awake together 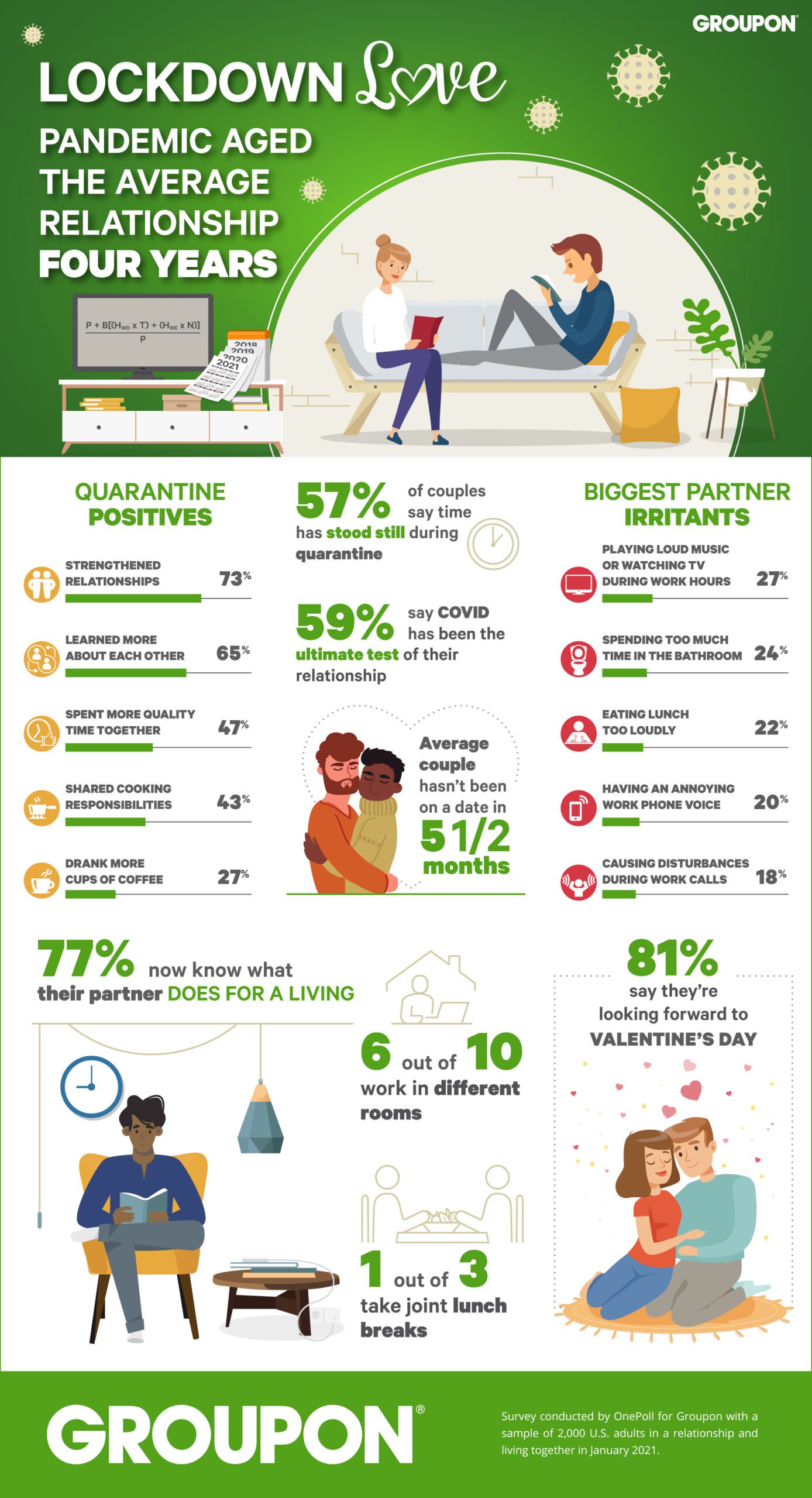 THIS zodiac sign voted most undateable by Americans across the nation

Americans say this helps them escape stress like nothing else

Americans say this helps them escape stress like nothing else