We Need to Spice Up Our Travel Habits, Study Finds 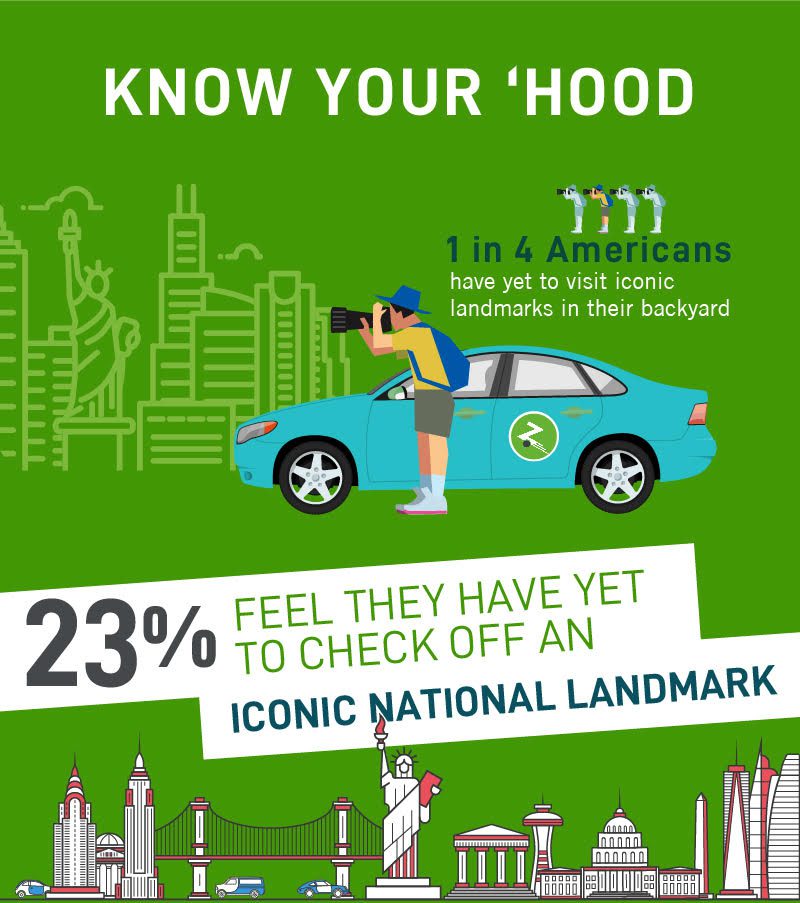 One in four Americans have yet to visit iconic landmarks in their own cities, according to new research.

From the Empire State Building to Niagara Falls to the Golden Gate Bridge to Mount Rushmore, a new study of 2,000 Americans found that while many far-flung places are yet to be checked off, many Americans are also missing out on things much closer to home. 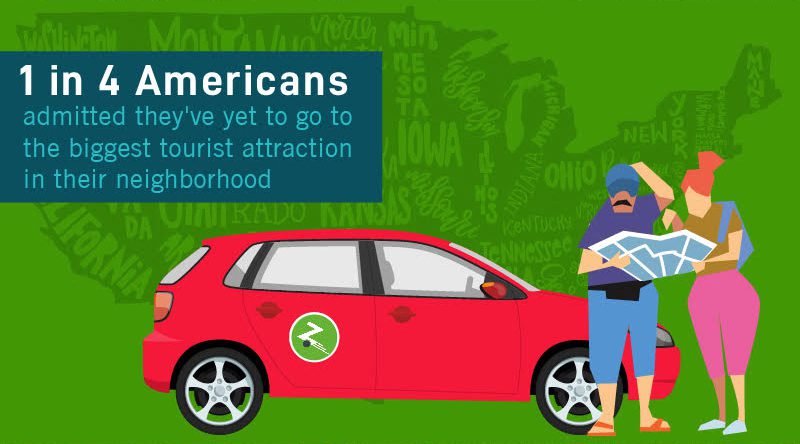 In fact, one in four admitted they've yet to go to the biggest tourist attraction in their own city and 23 percent feel they have yet to check off even one iconic landmark across the nation.

Respondents were also questioned on their attendance of several of America’s biggest tourist attractions and found many have a lot left to do - just 33 percent had seen Niagara Falls and 28 percent the Grand Canyon.

The study, commissioned by OnePoll in conjunction with Zipcar, the world’s leading car-sharing network, found that seven in ten people hadn’t been to the Empire State Building, while 78 percent had never managed to see the National Mall in Washington D.C.

Eight in ten Americans have a restaurant close by they’ve been meaning to try but never found the time, with a fifth saying they have as many as 10 food places in their local area they want to try but just haven’t tried yet.

55 percent admitted that they have a local landmark they want to check out but haven’t, and a similar number (53 percent) intend to check out their local library but have never quite made it.

“Our goal at Zipcar is to make cities better places to live not only through enabling smart transportation but also by encouraging the exploration of our local communities, which are full of new foods and flavors around every street corner,” said Katelyn Chesley, Zipcar spokesperson.”
Although over half of those polled felt they had some spontaneity in them, just a fifth felt they were good at getting out and about at short notice or on impulse. 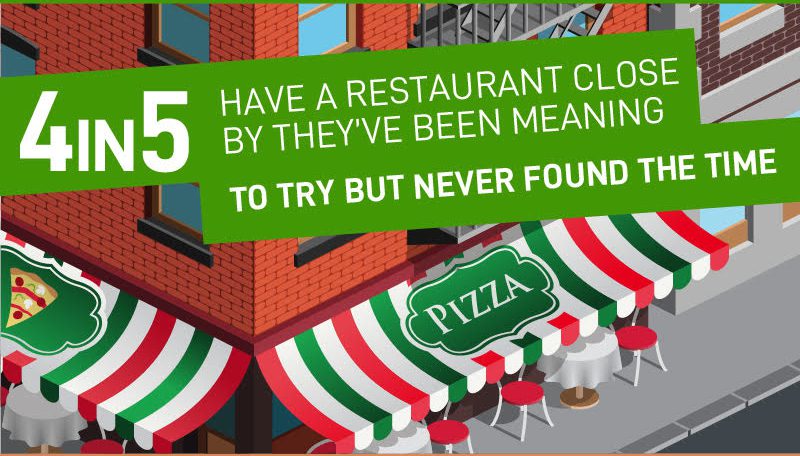 The lack of trying new things might explain why nearly half the respondents (49 percent) consider themselves a creature of habit and 52 percent wish they traveled about more.

With 43 percent of Americans finding comfort in their regular routines, it leaves little room for many to get out of their comfort zone and explore nearby locales.

Americans are no longer exploring what their neighborhood has to offer. It turns out that 58 percent of Americans don’t have a local coffee shop that they frequent regularly.

On average, the Americans polled said they try a new coffee shop just once every five months.

And it’s not just coffee shops that are missing Americans’ patronage. The average American will try a new restaurant every four months, a new park every five months, and a new museum every six months.

So, what is actually stopping Americans from exploring the best their ‘hood has to offer? Over half (51 percent) blame a lack of money, three in 10 complain that they don’t have enough time and are too busy, while 18 percent attribute their loss of exploration to the lack of reliable transportation and no one to go with.

With 54 percent of Americans craving spontaneity in their lives, it’s no surprise that 52 percent wish that they traveled more frequently.

It appears that millennials are open to trying new things more than older generations. In fact, six in 10 millennials often try new things compared to less than a third of those 55 and older (32 percent).

“Wherever your backyard bucket list takes you next, we’ve got the wheels to get you there, whether you need a big car for a family trip to the museum across town, a luxury car for that five-star restaurant you’ve been meaning to try, or an SUV for a backroad trip to a national park,” said Chesley. 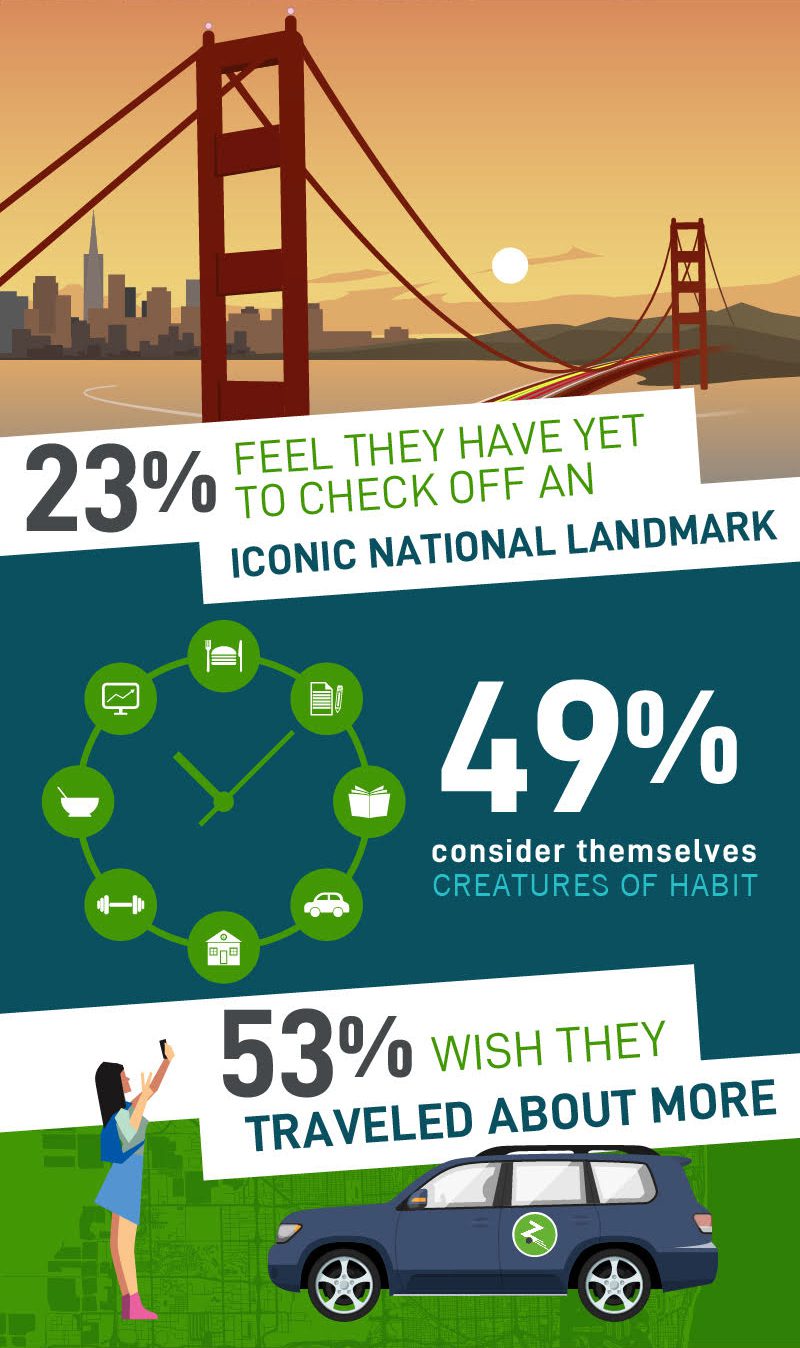 Survey Reveals what the New Dream Home Looks Like

Survey Reveals what the New Dream Home Looks Like