The average American spends 35 hours a year trapped in an Internet wormhole, according to new research.

The survey of 2,000 Americans examined what people do when they lose track of time online and found the average person will spend eight minutes, five times per week, lost in Internet wormholes while conducting informal research.

Three in four admitted time feels like it’s moving faster when they fall down these holes and spiral deeper into a fascinating topic - providing a data point to that common phrase “I don’t know where the time goes”.

The most common topics people love to research online were entertainment news (51%), current events (40%) and historical people and events (34%).

The average person is scouring the Internet for answers to all sorts of questions and looks something up five times a day on average, which adds up to an incredible appetite for unstructured online learning.

The survey conducted by OnePoll on behalf of global learning platform, FutureLearn, revealed four in every five people feel the readiness and availability of the Internet at their fingertips compels them to look up new or random information.

Forty-four percent of respondents were so confident in their knowledge that they consider themselves “unofficial experts” on certain topics because they’ve researched and educated themselves in this way.

Three in four (77%) confessed to experiencing a hit of satisfaction when they realize they are right when looking up a fact they weren’t sure about.

These fact-finding missions are often spurned by an argument with another person with the debate being settled at the end of a quick Internet search.

Two in five (42%) said they’re most likely to get into a debate over historical events and 41% admitted they tend to trade theories over politics or economics before someone needs to whip out a phone or laptop to confirm.

Over a third have debated more minute topics like spelling (37%) or which actor was in a movie (34%).

One in two (54%) described their area of expertise as a bit “unconventional” and something most people wouldn’t know a lot about.

Two in five (39%) think they could even make a career out of the knowledge they’ve obtained just from the unstructured learning provided by their Internet search history.

A spokesperson for FutureLearn said, “This demonstrates that people never stop learning - we just don’t realize how much unstructured learning we do as part of our average day. It’s key to find a topic that engages you and makes you want to know more. This study shows Americans have varied interests, get a buzz from unstructured learning and frequently take to the Internet to grow their knowledge and find answers.”

Forty-two percent wished they could return to the classroom to receive a more formal education in their area of Internet expertise.

Many respondents clearly showed interest in heading back to school with their careers in mind. One in four (26%) would love to learn more about healthcare and the same number showed interest in psychology and mental health (24%).

Twenty-five percent want to look back into the past with a history lesson while 23% would love to look at the stars to learn more about astronomy.

The spokesperson for FutureLearn added, “While pandemic precautions continue for most of the country, 67% want to expand their knowledge on a topic that interests them. We may not be able to travel to all the places we dream of right now, but the mind serves as its own gateway to all sorts of adventures.”

TOP TOPICS TO PROMPT A LOOK-UP WHEN PEOPLE DISAGREE

FutureLearn added that this data corresponds remarkably closely to the US results of their global Future of Learning trend report which can be downloaded here. 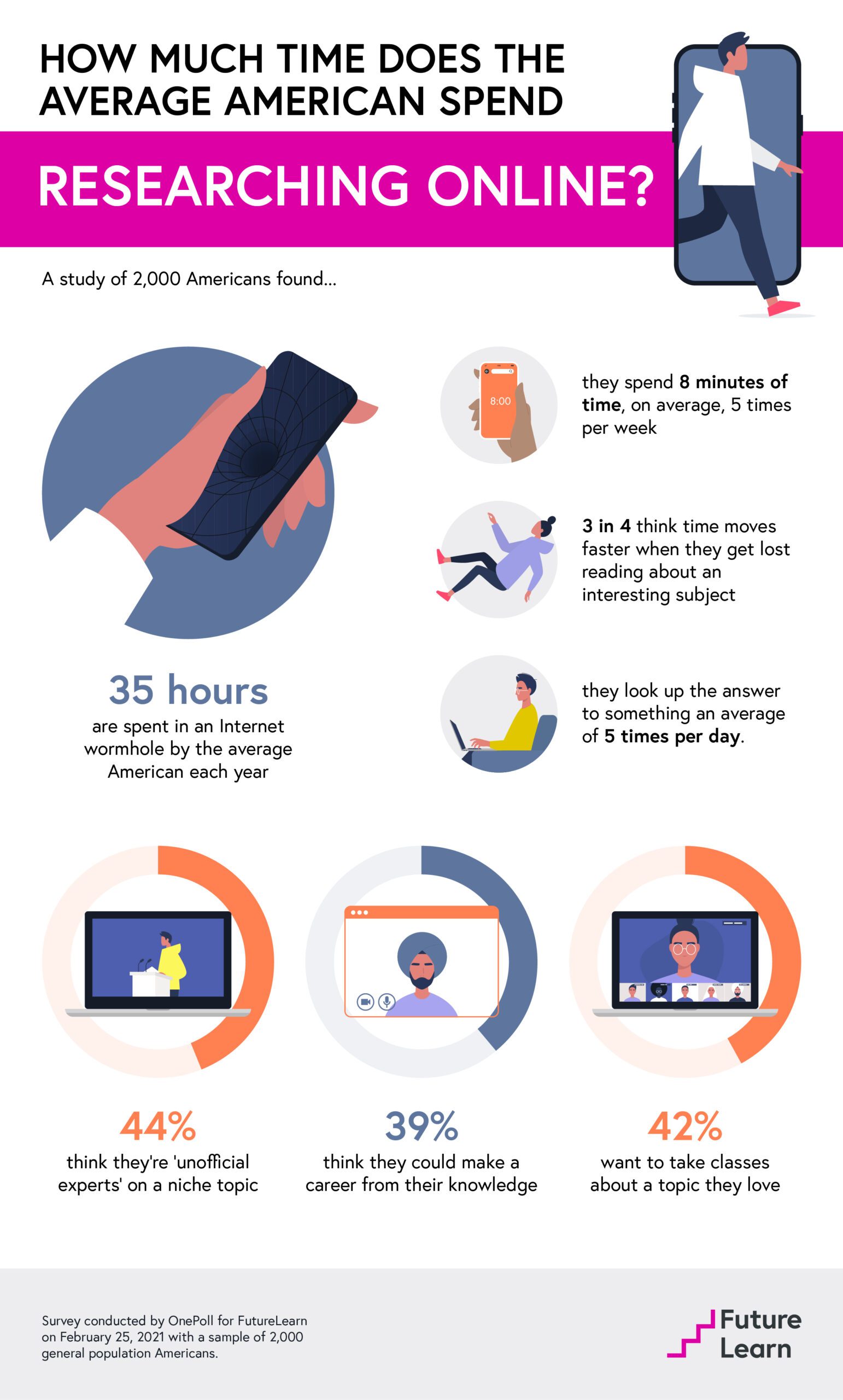